It was horrendous: loads of worker processes, thousands of virtual objects flying around the system - being taken off queues, being processed, being put back onto other queues. Some of the tasks involved creating new virtual objects that were put on other queues, whilst others destroyed objects that had been created elsewhere. All of the queues and objects were stored in tables in the database, and all in all, to settle just one trade took over 10,000 SQL queries. Yes you read that correctly.

It didn't need Sherlock Holmes to work out why they had a performance problem. But ironically, they weren't too concerned about any of that - they were more bothered about the huge number of deadlocks they were getting. The funny part about it is, I even guessed who'd designed it. Talk about ambulance chasing. Some years earlier the same software house had produced a database design as part of the replacement for a legacy system, and they'd obviously taken the whole entity / relationship thing a little too literally, because at the heart of their design were tables called "Entity" and "Relationship".

Anyway, the point of this article is about the way the virtual objects were stored on the database. There were many different types of object, each having varying numbers of attributes, and these were all stored in the database as name-value pairs. For those of you who don't know what name-value pairs are, then let me explain.

Imagine that our virtual object is a cat. Every cat has a number of different properties: name, colour, owner etc., and each of these is going to be stored in a separate row in the Attribute table. The name-value pair refers to the fact that our Attribute table has two important columns: one holding the name of the attribute, and the other it's value. So one of the rows might have the attribute name "Colour", and a corresponding value of "Black".

Figure 1: The attributes of a cat stored in a table as name-value pairs 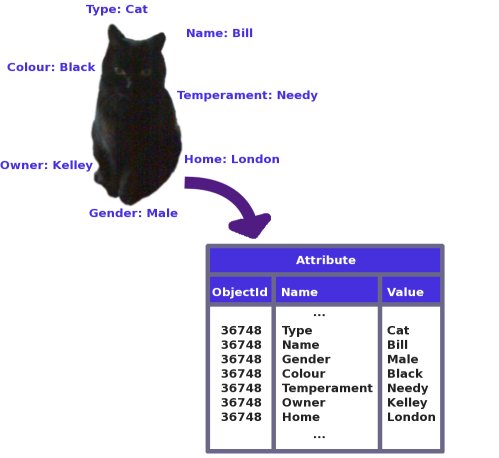 Unfortunately for Bill here, despite protestations of "I am not a number, I am a cat", we have to give him a serial number, or Object Id. This is to differentiate him from other objects, and to link his attributes together.

Now I generally don't like giving "always try to" advice, since techniques don't work in every situation, but I'm going to stick my neck out on this one and say this: avoid using name-value pairs like the plague. From a performance point of view, they are a nightmare:

So how should you do it? Well the easiest and most obvious thing to do is to just have a table for each different type (or class) of object, with each column storing a single attribute of the correct datatype. Nice and simple: any creation, modification, or destruction of an object requires just a single inserted, updated, or deleted row.

Figure 2: The attributes of a cat stored in a table as a single row 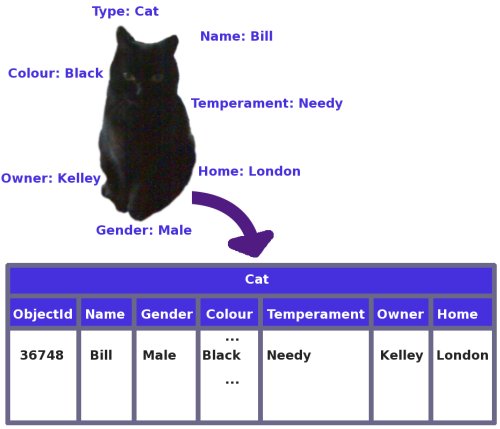 At the risk of providing you with an excuse not to take my advice, it wouldn't be a particularly balanced article if I didn't mention some of the reasons why people do use name-value pairs:

Although this looks like I'm giving you permission to use name-value pairs, the advice still stands: do not use name-value pairs. In the rest of this article I'm going to present a couple of ways of doing just that, but just to show how nice I am, I also provide some techniques for improving performance if you're going to take no notice of me, and use them regardless.

One way of avoiding name-value pairs is to use a technique called serialisation. Those of you who are familiar with Java programming may already be aware of this, as the language provides a framework for serialising Java objects. As with Java serialisation, it involves encoding an object into a string of bytes, and then storing them as raw data in a table, as a variable-length binary column. Of course, you can use serialisation even if Java is not your development language.

Figure 3: Serialising / de-serialising an object to / from a table

The exact method of encoding is left up to the architect or designer: it may be as simple as GZIPping a string representation of the object, or as complex as creating a custom compression scheme. Ideally it would allow even a fully populated object to be stored in a single row. Note that I'm not necessarily advocating storing the encoded object as a binary large object (BLOB), unless your particular database management system stores these in the row itself rather than in a separate page chain, and allows the column to be retrieved using standard SQL syntax. Sybase, for example, uses a separate page chain for "image" columns (its equivalent of a BLOB), and uses a different method to read and write data.

Serialisation isn't for everyone, and there are a number of implications of using it:

I should probably mention XML at this point, since some database management systems provide a native datatype that allows XML to be stored directly in a table. This makes it possible to store an XML representation of a virtual object. Personally I'm always extremely cautious about using XML; from a performance point of view it's a bit of a double-edged sword:

As an architect or designer, you should be aware of it, and have it as a weapon in your performance 'arsenal', but you may want to consider carefully whether you actually want to use it. Do not just succumb to the XML hype - it's only another text format after all.

A final point is that some RDBMSs even let you store Java objects directly in the database, although it may be that yours actually uses Java serialisation to do this. Unfortunately Java serialisation is pretty slow, and may not be the most efficient in terms of size. Also, you probably won't be able to store and retrieve the object using standard SQL syntax.

Another technique for dealing with large objects, or those with sparsely populated attributes, is that of vertical fragmentation - splitting attributes over more than one table. Another way of looking at it is that rather than one table per object, there is one main table plus one or more overflow tables.

To use this approach, you first need to collect some statistics on the usage of attributes in your object:

You then need to rank your attributes by the statistics that you have collected. You will end up with a table that looks like this:

Then you need to draw one or more lines on the table. Where you draw the lines is a matter for your judgement, specific requirements at your site, limitations of your RDBMS, and hopefully some testing. You may decide, for instance, that the top ten most commonly used attributes will be in the main table, while the rest will go into a single overflow table. If you are concerned about both performance and space, then you may want to juggle the attributes around between the main and overflow tables accordingly.

Remember that each additional overflow table will carry a performance penalty due to an extra join, so the fewer the better, but the advantages of this approach are:

Naturally, the two techniques suggested above are not mutually exclusive. It is perfectly possible to mix and match them both according to your specific requirements: you may, for example, have overflow tables that store serialised attributes.

OK, so you've completely ignored everything I've just said, and you're going to use name-value pairs anyway. Alternatively, you're using a content management system, and are stuck with them. I'll give you the benefit of the doubt, and assume that now you know how bad they are, you're going to change your database design, but for the moment you need an interim solution to aleviate your slow performance. Here I look at some techniques for improving the performance of name-value pair operations.

From here on in, the examples are given for Sybase Adaptive Server Enterprise (ASE), but it should be possible to replicate the techniques on other database management systems.

If you are creating new virtual objects or adding attributes to an existing object, instead of inserting attributes separately like this:

You can do them in a single query:

You can update multiple attributes in one query (and again, one transaction):

Obviously if you are only returning attributes to a client, and it doesn't matter that they are retrieved as a result set with multiple rows, then you can use a simple SELECT query. However, there may be times when you want to (e.g.) retrieve attribute values into variables in a stored procedure. A really sneaky way of doing this is as follows:

It's sneaky because even though we've said we're going to update the Attribute table, we are only actually updating the variables @value1 - @value5. The variables are updated as we go along, which is what makes it very useful. Ideally we would like to use a SELECT to do the same thing, because the downside of using an UPDATE is that records are written to the transaction log. Unfortunately you can't use a SELECT in Sybase here because the variables are not updated as we go along (i.e. after each row has been scanned) - any reference to the variables will yield the values that they had before the query started.

If you don't mind the log writes, then this is also a useful technique for concatenating values into a single string:

As always, you should test the queries to determine how they perform on your database system.

To receive updates, and to get your free guide: